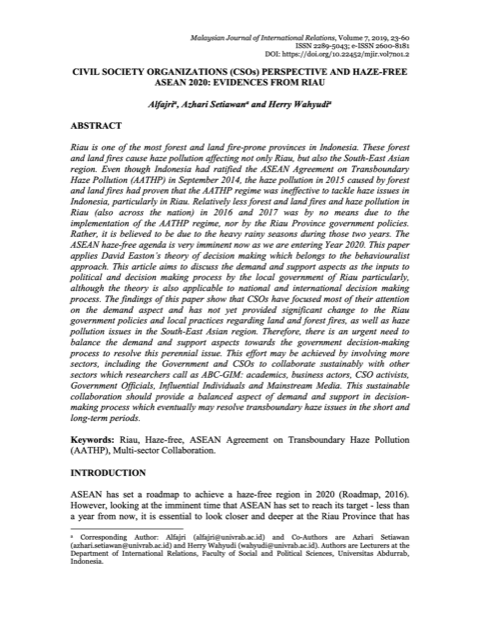 Riau is one of the most forest and land fire-prone provinces in Indonesia. These forest and land fires cause haze pollution affecting not only Riau but also the South-East Asian region. Even though Indonesia had ratified the ASEAN Agreement on Transboundary Haze Pollution (AATHP) in September 2014, the haze pollution in 2015 caused by forest and land fires had proven that the AATHP regime was ineffective to tackle haze issues in Indonesia, particularly in Riau. Relatively less forest and land fires and haze pollution in Riau (also across the nation) in 2016 and 2017 was by no means due to the implementation of the AATHP regime, nor by the Riau Province government policies. Rather, it is believed to be due to the heavy rainy seasons during those two years. The ASEAN haze-free agenda is very imminent now as we are entering the Year 2020. This paper applies David Easton’s theory of decision making which belongs to the behaviouralist approach. This article aims to discuss the demand and support aspects as the inputs to political and decision-making process by the local government of Riau particularly, although the theory is also applicable to the national and international decision-making process. The findings of this paper show that CSOs have focused most of their attention on the demand aspect and has not yet provided a significant change to the Riau government policies and local practices regarding land and forest fires, as well as haze pollution issues in the South-East Asian region. Therefore, there is an urgent need to balance the demand and support aspects towards the government decision-making process to resolve this perennial issue. This effort may be achieved by involving more sectors, including the Government and CSOs to collaborate sustainably with other sectors which researchers call as ABC-GIM: academics, business actors, CSO activists, Government Officials, Influential Individuals and Mainstream Media. This sustainable collaboration should provide a balanced aspect of demand and support in the decision-making process which eventually may resolve transboundary haze issues in the short and long-term periods.