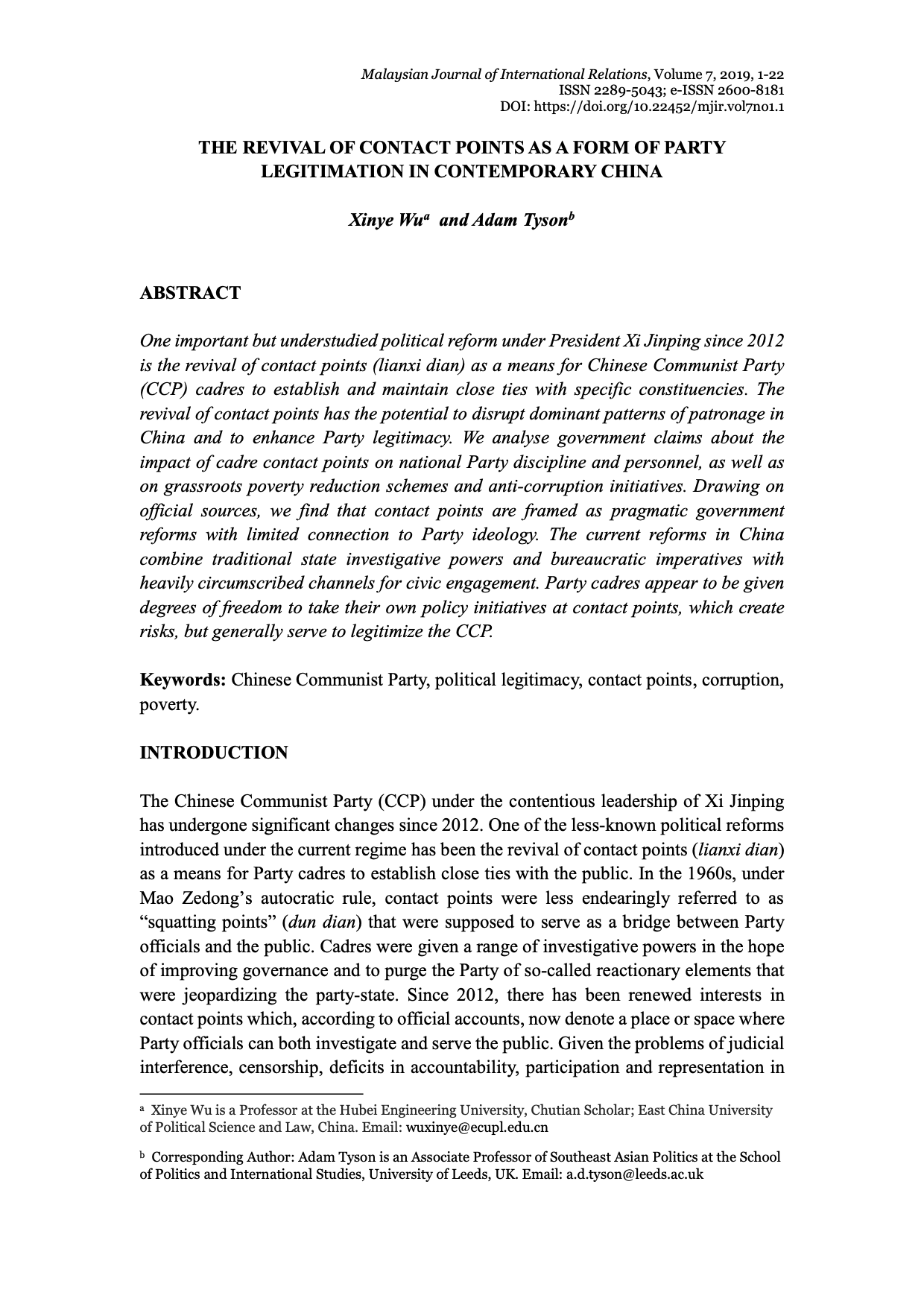 One important but understudied political reform under President Xi Jinping since 2012 is the revival of contact points (lianxi dian) as a means for Chinese Communist Party (CCP) cadres to establish and maintain close ties with specific constituencies. The revival of contact points has the potential to disrupt dominant patterns of patronage in China and to enhance Party legitimacy. We analyse government claims about the impact of cadre contact points on national Party discipline and personnel, as well as on grassroots poverty reduction schemes and anti-corruption initiatives. Drawing on official sources, we find that contact points are framed as pragmatic government reforms with limited connection to Party ideology. The current reforms in China combine traditional state investigative powers and bureaucratic imperatives with heavily circumscribed channels for civic engagement. Party cadres appear to be given degrees of freedom to take their own policy initiatives at contact points, which create risks, but generally serve to legitimize the CCP.

Professor at the Hubei Engineering University, Chutian ScholarÍ¾ East China University of Political Science and Law, Pujiang ScholarÍ¾ University of Leeds, Visiting Scholar. His research interests include grassroots politics, NGOs in China, and public administration. He has recently published in journals such as Nationalism and Ethnic Politics, the CASS Journal of Political Science, the Journal of Wuhan University (Social Sciences Edition), and Chinese Public Administration, and has published four monographs on NGOs and grassroots politics in China, the most recent being Rural Social Governance in the Process of Urbanization in China, published by the Shanghai Peopleâ€™s Press in 2014. Email: wuxinye@ecupl.edu.cn

Associate Professor of Southeast Asian Politics at the School of Politics and International Studies, University of Leeds. His research interests include comparative political transitions in East and Southeast Asia, decentralization and governance, and state-society relations. He is the principal investigator on a British Academy project looking into the impact evidence-based forestry in Indonesia. He has published recently in such journals as Contemporary Southeast Asia, Forest Policy and Economics, The China Quarterly, and Critical Asian Studies. His monograph Decentralization and Adat Revivalism in Indonesia: The Politics of Becoming Indigenous was published by Routledge in 2010, and he is the editor of a 2018 book entitled The Political Economy of Brain Drain and Talent Capture: Evidence from Malaysia and Singapore published by Routledge. Email: a.d.tyson@leeds.ac.uk