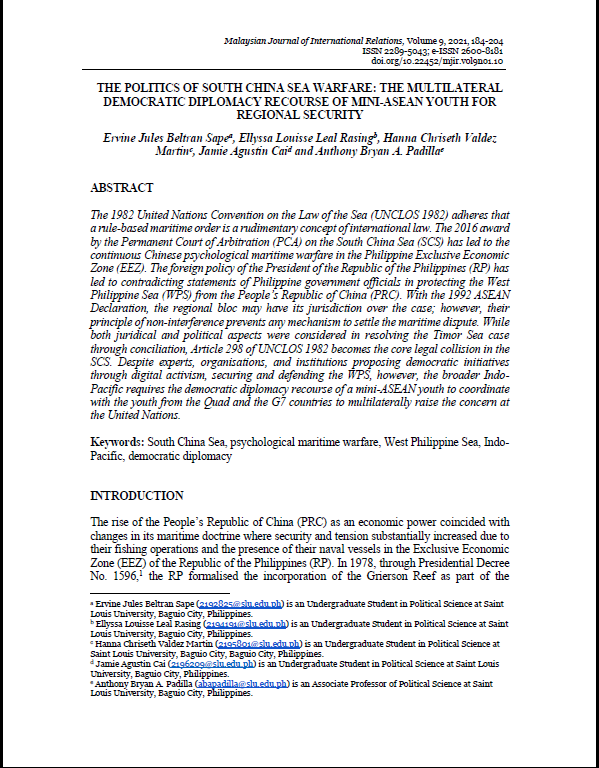 The 1982 United Nations Convention on the Law of the Sea (UNCLOS 1982) adheres that a rule-based maritime order is a rudimentary concept of international law. The 2016 award by the Permanent Court of Arbitration (PCA) on the South China Sea (SCS) has led to the continuous Chinese psychological maritime warfare in the Philippine Exclusive Economic Zone (EEZ). The foreign policy of the President of the Republic of the Philippines (RP) has led to contradicting statements of Philippine government officials in protecting the West Philippine Sea (WPS) from the People’s Republic of China (PRC). With the 1992 ASEAN Declaration, the regional bloc may have its jurisdiction over the case; however, their principle of non-interference prevents any mechanism to settle the maritime dispute. While both juridical and political aspects were considered in resolving the Timor Sea case through conciliation, Article 298 of UNCLOS 1982 becomes the core legal collision in the SCS. Despite experts, organisations, and institutions proposing democratic initiatives through digital activism, securing and defending the WPS, however, the broader Indo-Pacific requires the democratic diplomacy recourse of a mini-ASEAN youth to coordinate with the youth from the Quad and the G7 countries to multilaterally raise the concern at the United Nations.